Optimizing lighting for image scanning is essential to image correction 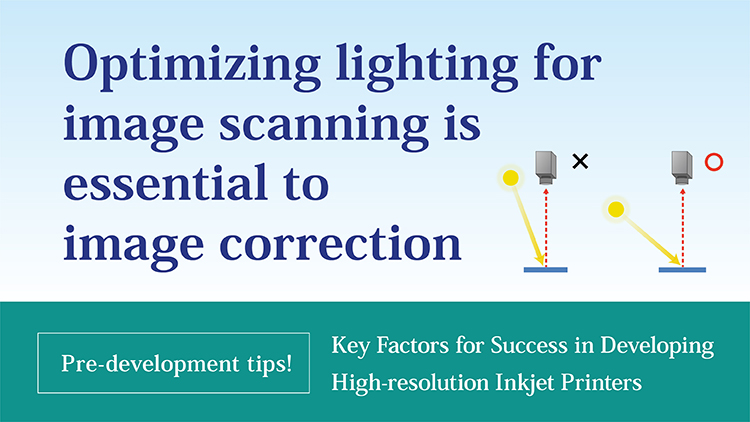 Look at the images below. V ariance in lighting leads to errors in ascertaining the state of the print image, preventing the necessary corrections. In some cases, additional lighting may even worsen image quality.

In particular, illumination in the image scanning device must not only be hi ghly uniform but must also be wider than the width of the printed substrate being scanned. Connecting several lighting elements or positioning multiple lighting units in a staggered arrangement to secure a broad lighting area may help. Ho wever, even with these measures in place, variance in lighting still occurs in a reas where the lighting elements or lighting units are linked.

To prevent variance in lighting, the following countermeasures are needed.

In some cases simply using a long illumination with no connecting areas does not deliver sufficient image scanning performance. Light reflection properties can vary because they depend on characteristics of the substrate, especial ly flaws such as streaks and banding. Although adjustments such as optimizing the angle of illumination according to the device are essential in such cases, this requires finding the optimum angle while also taking into account the unevenness of the substrate caused by variance in flatness of the feeding conveyer, meaning that significant trial and error is necessary.

During development of the FUJIFILM JET PRESS, Fujifilm conducted repeated testing to optimize the system by using a lighting angle that tolerates flatness variations and substrate defects, such as creases. The knowledge gained during this development has been utilized in Fujifilm's subsequent printer models, significantly shortening development lead time.

Fujifilm applied the knowledge and techniques gained through thi s experience, and developed SAMBA® JET PRESS Components （JPC） for single-pass inkjet development. By applying its knowledge and techniques through SAMBA® JPC and increasing the efficiency of development, Fujifilm hopes to lead the digitalization of printing and contribute to the expansion and growth of the inkjet market.

Back To PLANNING TIPS