Systematic analysis of streaks and banding 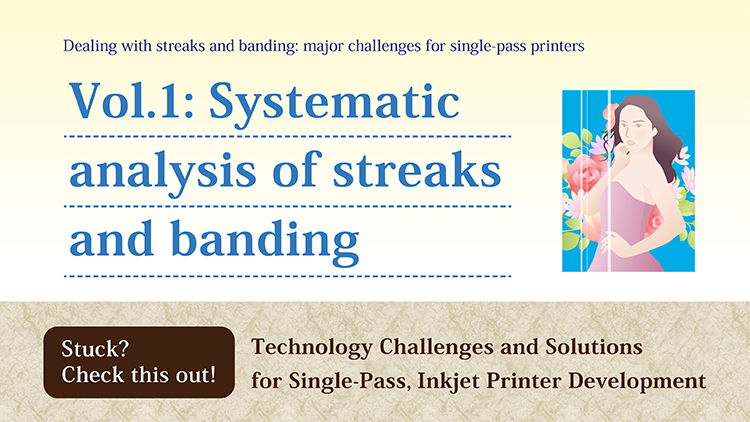 Based on experience, compile factual data from various viewpoints and identify causes

As outlined on the previous page, to consider causes prior to examining countermeasures, Fujifilm suggests that you compile and categorize factual information from various perspectives.

Let us consider three cases and the approaches taken.

All three cases appeared similar in terms of irregular density (what), repeatedly occurring at start of printing (when), and the location on the print material where they occurred (where). In case 1 the irregular density was concentrated on a printbar of a specific color, whereas in cases 2 and 3 it occurred in all colors (who). The characteristics (what) and timing (when) of banding were similar, but differences could be identified when looking at the location of occurrences (where). Moreover, when feed speed was altered as part of diagnostic testing, major changes occurred in the phenomenon (how). In this case, it could be assumed that there was a high possibility of irregular density caused by defective fastening of the printbar . In reality, various other parameters and phenomena needed to be identified and evalu ated to specify the cause.

Based on information gained in this way, broadly categorize cau ses and analyze in detail the specific causes of streaks or banding. In the course of developing FUJIFILM JET PRESS products, in some instances we were fortunately a ble to accurately specify causes and simply take measures to address them, but in many other cases we struggled to deal with problems despite being able to specif y their cause, or struggled even to identify the causes. We conducted detailed a nalyses, sometimes testing fundamental elements and sometimes resolving issues by thinking outside the box. Through this process, Fujifilm has now managed to achieve high levels of stable image quality with FUJIFILM JET PRESS products.

Through JET PRESS development, Fujifilm has amassed a wide range of knowledge and data analysis techniques for specifying causes and addressi ng problems. We can support your printer development and contribute to the deve lopment of the inkjet industry as a whole. Future articles in this series wil l provide further details and examples of the solutions to streaks and banding discussed in this article.

If you have questions about streaks and banding or would like t o discuss specific issues, please do not hesitate to contact us via the inquiries form provided via the Link below.