Challenges for banding in the feed direction 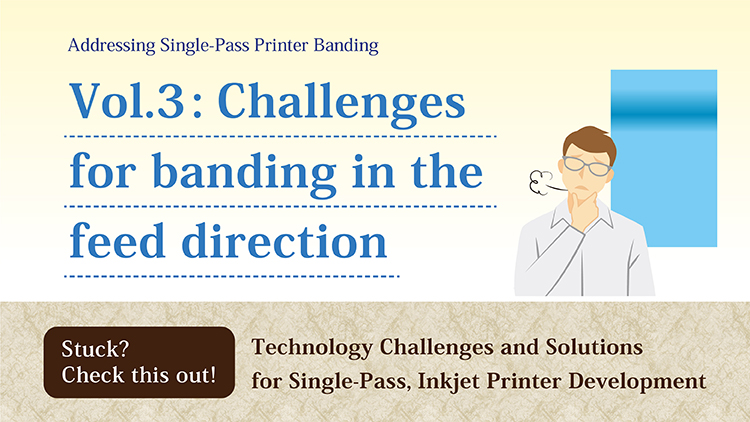 FUJIFILM SAMBA JPC® offers critical system components to integrators and OEM manufacturers of inkjet printing systems. Based on Fujifilm’s SAMBA® Printhead core technology these include a set of modules that allow inkjet printing solution integrators to leverage Fujifilm’s experience in developing inkjet printers, such as the FUJIFILM JET PRESS®, to facilitate development and compress their time to market.

Implementation of high-speed printing at high resolution, such as printing at 1200 x 1200 dpi, often produces printing conditions where print artifacts occur in the output. Incorporating FUJIFILM SAMBA JPC® modules can aid in the design of printing systems to permit dynamic and active mitigation of these artifacts, including banding. Several types of banding that can occur, so following a well-defined diagnosis path will support the identification of both source and the optimally suitable FUJIFILM SAMBA JPC® module that will speed up resolution of these issues.

This document provides guidance on how to diagnose and address banding artifacts stemming from printhead vibration and synchronization of the paper transport and the printhead.

There are several reasons you may be experiencing banding and other artifacts. Some of the reasons may be related to the approach to the system design, which was addressed in previous articles along with recommended countermeasures. The focus of this article is banding, which commonly occurs due to vibrations or due to synchronization issues between media transport and the print bar jetting module. Banding may manifest in several ways, including a consistent, repeated pattern or intermittent appearances.
Figure 1 shows examples of banding that can occur as a result of vibration or synchronization issues between the jetting modules and media transport. These can occur at any point during printing in regular intervals or intermittently. You may notice it more at certain speeds or with specific colors.

How to diagnose the source of banding?