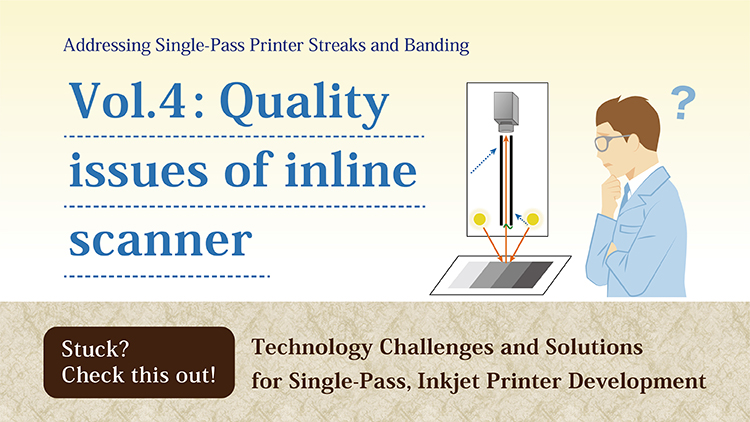 An imaging inspection system lights the printed media, thereby reflecting light onto an image sensor to capture the scan.
If the lighting equipment isn’t calibrated or has missing elements, or if there are physical obstructions that prevent the ILS from scanning a perfect image, the sensors may compensate, creating banding in the printed output.

If the ILS detects stray light because of reflection in its image path, the scanned image may have areas that are brighter than the original print. As a result, the image compensation software may pick up the variations and attempt to correct for them. This over-correction causes the output to exhibit dark banding where the light reflection was detected.

One solution may be to identify the source of the light contamination and address it such that stray light no longer enters the scanner. Take care to avoid obstructions to the scanning light while correcting the source of stray light reflection. Even a small foreign object may interfere with the optical path, affecting the quality of the scanned image.

For example, it is common to use slits with widths of several millimeters to suppress stray light, but lint or other foreign matter less than 1 millimeter in length may adhere to the optical path and affect the scanned image.

Streaks or banding impacted by calibration

In some cases, streaks and banding may be caused by processes performed inside the Inline Scanning system. The ILS uses an image sensor to read the reflected or transmitted light from the print. Calibration performed inside the ILS corrects for variations in the image sensor sensitivity and the brightness of the reflection. However, if this calibration process is incorrect, the scanned images may perpetuate these anomalies, causing streaks and banding.

For example, when calibrating, the white reference for the ILS, which is the reference palette for light measurement, is read first.

If foreign matter or ink mist adheres to the light reference surface, calibration performed on the sensor may be incorrect as it encompasses these anomalies in the calibration. Recommended countermeasures that can help minimize this risk include:

As each remediation measure is taken, review the impact on the entire ILS to ensure no new anomalies are introduced.

Fujifilm’s SAMBA JPC® is a component product that organizes and incorporates the knowledge and technology gained from decades of experience so that it can be used by those who are working on the development of high-resolution, single-pass inkjet printers.

By utilizing its knowledge and technology through FUJIFILM SAMBA JPC® and making integrator and OEM manufacturer development more efficient, Fujifilm hopes to lead the digitization of printing and contribute to the expansion and development of the inkjet market.